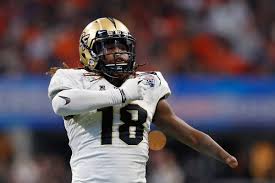 Shaquem Griffin is not just an excellent story, he is a great football player. When Griffin was 4 years old he lost his left hand due to amniotic band syndrome. However, this disease did not prevent him from winning the American Athletic Conference Defensive Player of the year in his first year as a starting linebacker in 2016. Griffin was once again a first-team all-conference choice in 2017. Now, Shaquem Griffin is the first NFL player ever to be drafted with one hand. The Seattle Seahawks drafted Shaquem Griffin number 141 overall and will now join his brother Shaquil in Seattle.