The Falcon's Flyer • May 20, 2019 • https://falconsflyer.org/15882/studentfiction/jeffrey-the-knight-the-learning-of-the-arts-part-two/

Jeffrey the Knight: The Learning of the Arts (Part Two)

As Jeffrey and his uncle, the great wizard Radagast, descended into the armory, they discussed how to best approach the different challenges that lied between Jeffrey and the Juicebox. “Uncle, how do I do well on the riddles portion of the challenge?” Jeffrey asked. Radagast replied, “You must go back to school for that. At school, you must visit the Academic Olympics team to learn about how to solve logic puzzles.” “What about the dragon?” Jeffrey continued. “For that, you must visit the apothecary. She will teach you how to make the strongest sleeping potions in the land,” replied Radagast. As they neared the armory, Jeffrey spoke in a solemn voice. “Uncle, what about the final guardian of the Juicebox?” Radagast shook his head and stated, “I do not know how to prepare you for that. But I do know one thing: It will take great courage and a heart of gold.” The pair finally reached the armory, and started suiting Jeffrey up. They gave him a magnificent armor of black steel (the strongest material, and lightest, in Zuerael), with a gold stripe going down the arms. It also had Jeffrey’s family’s crest on the front, with a magnificent drawing of a dragon on the back. They also gave Jeffrey a strong sword and a beautiful white and gold horse. Jeffrey thanked his uncle, and was ready to go to train for his quest. However, Radagast stopped him, and said, “Jeffrey, good luck on your journey. I want you to remember just one thing: stay true to yourself. This quest does not mean anything if you do not stick to your ideals and morals.” Jeffrey hastily replied, “I know, I know, uncle. Thank you!” And he was on his way. Jeffrey’s first stop was his old middle school. There, he met up with Mr. Richard, the eccentric, but incredibly smart Olympics coach. The two greeted, and Mr. Richard went into a deep lecture on how to best approach riddles. “It’s just a logical approach… think about it in a wider view… simple is best…” and on and on they went. At the end of it, Jeffrey was just about dreaming of riddles. Jeffrey thanked Mr. Richard, and went to see the apothecary. She was a patient old woman named Alice, who taught Jeffrey about all the different herbs and minerals in the land. At the end of it though, she gave him an unexpected tip. “Jeffrey,” she said, “remember, all potions work best when paired with something else, something that typically seems very outlandish.” Jeffrey didn’t know what to make of this comment, however, he didn’t give it much thought. He finally thanked her, said good-bye to his family, and was ready for his quest. “Here we go,” Jeffrey whispered to himself, and rode off into the unknown territory outside the kingdom of Zuerael.

We also had a drawing contest for this article! Below are the top 3 entries 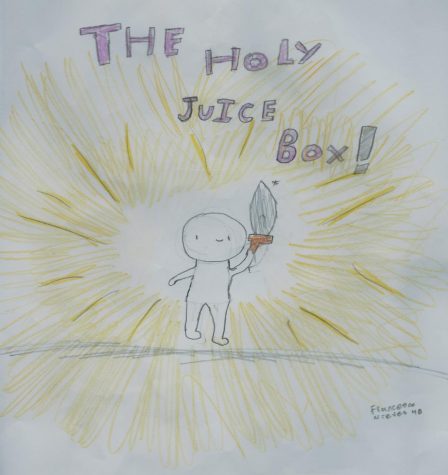 Thank you to everyone who submitted a drawing! Amazing art, Falcons!